FEATHERWEIGHT by Kari Sperring
THE ART OF MASKS by Sherwood Smith
CULVERELLE by Sean McMullen
FORTUNE’S STEPCHILD by Sheila Finch
THE WOMAN WHO FELL IN LOVE WITH THE HORNED KING by Judith Tarr
A WREATH OF LUCK by Madeline E. Robbins
EMBERS by Shannon Page and Jay Lake
QUESTION A STONE by Tanith Lee
A SWAIN OF KNEADED MOONLIGHT by Dave Smeds
FIRE AND FROST AND BURNING ROSE by Rosemary Hawley Jarman
THE GARDEN OF SWORDS by K.D.Wentworth
BLUE VELVET by Diana E. Paxson
OUTLANDER by Samantha Henderson

Deborah Ross is discussing the stories in the anthology on her blog – why feathers? and the Australian connection.
*NOT GRUESOME for once, I promise.

I'm a writer and poet whose work has appeared in Strange Horizons, Realms of Fantasy, Weird Tales and many other publications both in print and online. You will find links to some of my short stories and podcasts, as well as some interviews and links to purchase some of my books.

The House of Forever: Selected Poems 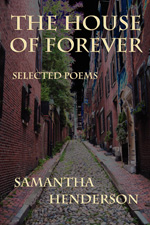 A collection of 21 time-bending poems, nine never before published

Now available as an audiobook! Check it out on Amazon.com